There's a New Oligarch in Town

The National Basketball Association's first owner from outside North America got down to business in his own unique style Wednesday. First he had an early-morning meeting with New York City Mayor Michael Bloomberg. Then things got interesting. 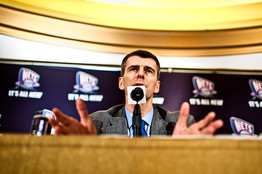 Russian billionaire Mikhail Prokhorov, the new owner of the New Jersey Nets, announced he was dumping his general manager without first telling that general manager about the decision. He said the Nets, winners of 12 games this past season, would make the playoffs next year and win a championship within five. "A little bit of luck, a little bit of money, we go straight to the top," he explained.

He bought a group of reporters breakfast at the pricey Four Seasons Hotel one month after the end of a season in which the franchise downsized across the board. He said Dallas Mavericks owner Mark Cuban is probably too involved and too outspoken for his own good. (Mr. Cuban declined to comment). He said Duke coach Mike Krzyzewski doesn't have what his team needs in its next coach.

Then, Mr. Prokhorov cut open his breakfast sausage and raised an even larger question: what the Nets should be called. "Tell me," he asked the dozen reporters around the table, "what do you think of this name?"

The major North American sports leagues have seen their share of colorful owners before. There have been Washington power brokers like former Redskins boss Jack Kent Cooke and forces of nature like Yankees principal owner George Steinbrenner. But there has never been anything quite like Mr. Prokhorov, a 45-year-old Russian playboy with an estimated net worth of more than $10 billion.

He boasts of his skills as a kick-boxer, jet skier and businessman and refuses to carry a mobile phone or send email. Mr. Prokhorov said he usually spends 12 to 15 hours each day in his office, sleeps five or six hours each night, then every three weeks throws a party with his friends or takes a trip.

"I have my own way," he said, with a wry grin. He plans to attend 10 regular-season games next season but remain in close touch with team executives from his base in Moscow.

For the NBA, Mr. Prokhorov represents an opportunity for the league to become the truly global venture Commissioner David Stern has always wanted it to be. Despite some 80 or so international players, ownership has generally been all-American.

A generation ago, the Nets were owned by the "Secaucus Seven," a collection of moderately successful New Jersey businessmen that included lawyers, real-estate developers, a stock broker and an embroidery salesman.

Compare that with Wednesday. A little more than 12 hours after representing the Nets at the NBA Draft Lottery, Mr. Prokhorov was talking about turning the Nets into a global franchise that would raise basketball beyond its second-rate status in Europe, where soccer, and in the case of Russia, hockey, are far more popular.

"He can be an entrée for the league in that marketplace," said Russ Granik, the former deputy commissioner of the NBA. "What you want is an owner who is very involved, who puts good people in place and runs the team professionally, and so far that's how he's been portrayed."

Since agreeing last year to buy 80% of the Nets for $260 million, Mr. Prokhorov has stayed largely out of the spotlight, other than agreeing to be profiled on "60 Minutes." The deal for the Nets, who intend to move to Brooklyn for the 2012-2013 season, finally closed last week, and Mr. Prokhorov wasted little time showing the frank and direct style of management he will bring to the NBA.

While he announced his plans to retain Nets president Rod Thorn, Mr. Prokhorov said general manager Kiki Vandeweghe would be let go after his contract expires on June 30.

His departure seemed to be news to Mr. Vandeweghe. Reached by phone on a plane bound to Chicago for a scouting trip, he said of his departure, "I hadn't heard anything." He declined to comment further.

Gary Sussman, a Nets spokesman, said Mr. Prokhorov had been asked a question regarding Mr. Vandeweghe's future and decided to answer it honestly.

For a businessman who has been described as distant and secretive, Mr. Prokhorov was more honest than anyone expected. He talked about his efforts in 2008 to buy the New York Knicks and possibly the Rangers, but that the teams and their arena, Madison Square Garden, couldn't be separated from Cablevision, the media empire controlled by the Dolan family, which owns the teams.

With his team's coaching job vacant, Mr. Prokhorov said he respects Mr. Krzyzewski, but he suggested that he's sorely lacking in the one area Mr. Prokhorov believes is critical to rebuilding the Nets—NBA experience. A spokesman for Mr. Krzyzewski declined to comment.

(Mr. Prokhorov also jokingly offered the job to Mr. Bloomberg, who, successful as he has been, has never coached in the league, either.)

Before long he was casting the 21st-century Nets, the NBA definition of lackluster for much of their 43-year history, as basketball's version of the ascendant Chelsea soccer club under the ownership of fellow Russian oligarch Roman Abramovich. Since buying the club in 2003, Mr. Abramovich has turned Chelsea into a major international brand and one of the most successful clubs in the world.

Mr. Prokhorov said he intends to be in New York on July 1 to entertain the best free-agent class in NBA history, a star-studded group headlined by LeBron James, Dwyane Wade and Chris Bosh. "I am pretty sure I can convince the best of the best that the Nets is the place to be," he said.

First, though, Mr. Prokhorov has other business to attend to. He said he planned to return to Moscow on Wednesday night to close two major deals during the next two weeks. When he returns, expect the unexpected.

"Russians" he said, "are more unpredictable."